Last week, I wrote about one of Jesse Livermore’s triumphs. This week, however, it’s a tragedy I’m writing about. 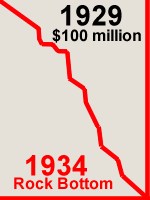 From the 1929 pinnacle of his career, when he shorted the market for a profit of $100 million, less than five years had passed.

A few months earlier, Jesse Livermore had gone missing and his wife had called in the police. A day after disappearing he had returned home, walking unsteadily. He had spent the night in a hotel and had awoken with a blank mind. Reading newspaper headlines about his disappearance brought him to his senses. His doctor’s verdict: “Amnesia nervous breakdown.”

It’s likely that during this period of his life, Livermore was suffering badly from the clinical depression he suffered from at various times.

To Lucille Ballantine – a dancer – he had promised to pay $150 per month for five years for keeping him “cheered and amused” while he was getting his second divorce.

A former employee – Naida L. Krasnova – was suing him for breach of promise. (Claiming he had promised to marry her.)

Time commented: “Perhaps Jesse L. Livermore will come back as he has done three times before. That was what his lawyers had in mind last week when they declared: ‘Mr. Livermore has made three very large fortunes. … He has failed three times, on each occasion [he] has paid 100 cents on the dollar with interest, and hopes to do so again.’ ”

Sadly, on this occasion, the lawyers’ optimism was misplaced.

From the Livermore Blog

This website uses cookies to improve your experience while you navigate through the website. Out of these, the cookies that are categorized as necessary are stored on your browser as they are essential for the working of basic functionalities of the website. We also use third-party cookies that help us analyze and understand how you use this website. These cookies will be stored in your browser only with your consent. You also have the option to opt-out of these cookies. But opting out of some of these cookies may affect your browsing experience.
Necessary Always Enabled
Necessary cookies are absolutely essential for the website to function properly. This category only includes cookies that ensures basic functionalities and security features of the website. These cookies do not store any personal information.
Non-necessary
Any cookies that may not be particularly necessary for the website to function and is used specifically to collect user personal data via analytics, ads, other embedded contents are termed as non-necessary cookies. It is mandatory to procure user consent prior to running these cookies on your website.
SAVE & ACCEPT